How does basic refrigeration cycle work?

The basic refrigeration cycle for beginners

If we are interested in learning how a refrigeration system works, it is helpful to understand from the Ph (Pressure Enthalpy) chart perspective. It makes our life easier.

This is how the refrigeration cycle diagram looks: 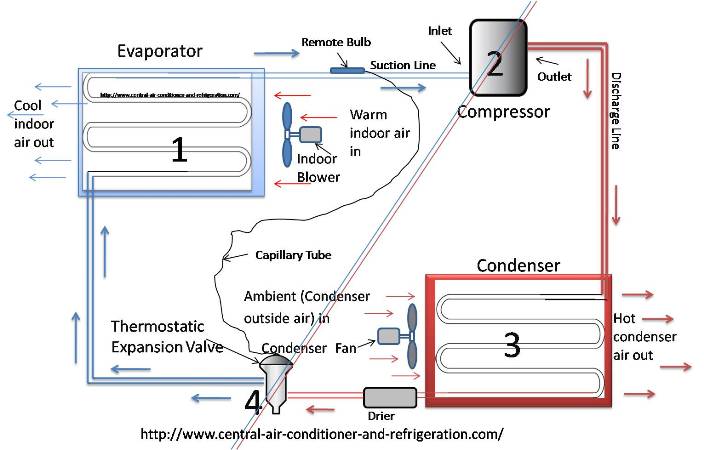 We could know the entire thing by knowing the pressure and temperature of the evaporator, condenser, and compressor.

Here is how a Ph charts looks: 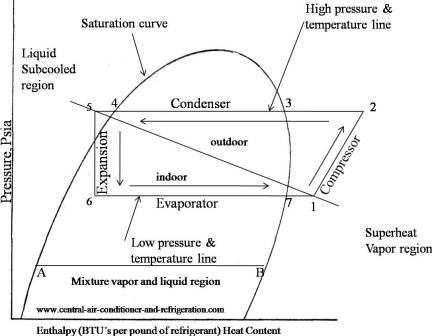 The Ph chart graphically shows where the physical states of these four mechanical components is and what is happening to the refrigerant within these components.

There are two laws that are significant to understand the basic refrigeration cycle and air conditioning.

Thermodynamics’ first law explains that energy cannot be neither created nor destroyed, but can be changed from one form to another.

This is just the basic btw. If we’re interesting, we should take thermodynamic class. We’ll learn all the equation and calculation behind it. 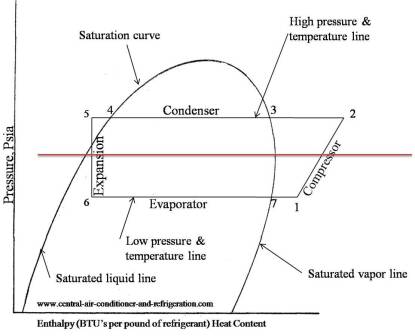 The refrigeration system removes heat from an area that is low-pressure, low temperature (evaporator) into an area of high-pressure, high temperature (condenser).

It then transfers that heats to condenser (high side) through compressor.

A hot refrigerant from the compressor flows to a cooler location the condenser medium (air surround condenser) for example, the refrigerant will give up the hot vapor heat it absorbs from the indoor evaporator and becomes cool again and turns back to liquid. This is what the second thermodynamics’ law stated.

Air conditioning is a way to keep our home comfortable by controlling the temperature, air movement, cleanliness, humidity, or dehumidify for our comfort.

To move heat from the evaporator to the condenser we need Ac Freon, and other mechanical components, therefore we need to understand how heat transfers.

So how does heat transfer occur in the basic refrigeration cycle?

Maybe we are wondering how hot 75°F air transfers it heat to cool 40°F refrigerant. Well, there are three methods of heat transfer. They are conduction, convection, and radiation or any combination of the three methods.

Heat transfer by conduction is when we heat a copper pipe to 100°F and grab that hot copper with our bare hand (I don’t recommend that anyone should do that, it’s just for the example). That is molecule to molecule heat transfer.

Radiation is the transfer of heat in an invisible ray, for example, sun ray. We cannot see it, but we can feel the sun ray hits our skin.

Convection is the transfer of heat from one place to a different location by circulating it with a fan (force movement) or natural movement.

These refrigerants could be R-22, R 410a, or R134a. It depends on what kind of refrigerant the air conditioner units are designed for. Refrigerant can change state from vapor (by absorbing heat) to liquid (by condensing that heat). 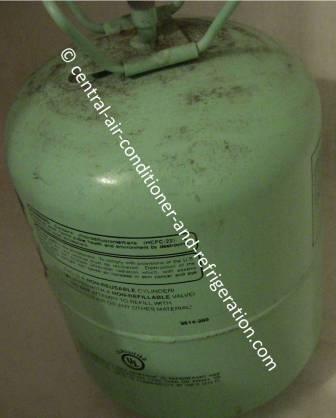 Here is Principles of refrigeration video

HVAC's video made by PublicResourceOrg

Make sure to press the Play button in the player controls to watch it. Enjoy!

What are two forms of heat and where does it take place in basic refrigeration cycle?

Sensible Heat when change in temperature can be measured by a thermometer or when we put our hand on an object we’ll feel heat. That is sensible heat.

Latent Heat absorbed or rejected when a refrigerant is changing state from liquid to gas, or vice versa; however, the temperature remains the same. Heat is known to add to refrigerant but does not register in a thermometer, it just changed the refrigerant state (gas to liquid, or vice versa). This is also known as hidden heat.

First-lesson on how the basic refrigeration cycle works

Understanding the basic refrigeration cycle diagram also helps us to find subcooled, superheat and to troubleshoot refrigeration processes much easier.

As we can see in the Ph diagram below. Saturation curve this curve represents what state (vapor or liquid) and region (sub-cooled, latent heat, and superheat) the refrigerant is in. It also splits into two sections a saturation liquid line and a saturation vapor line. 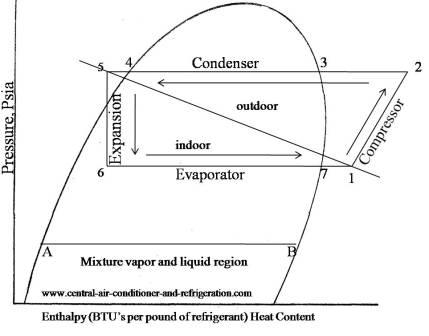 The area under the curve represents latent heat or a mixture of vapor and liquid region (point A to B). Heat that causes the refrigerant to change state, vapor to liquid or liquid to vapor.

The area to the right of the curve represents refrigerant in a superheated vapor region. Superheat is heat added to the refrigerant after it has reached 100% saturated vapor state. Point three and eight are saturation superheat vapor.

In any central air conditioning unit we will have five basic mechanical components: a compressor, a condenser, an expansion device (metering device), an evaporator and a refrigeration copper tube that connects them.

In the typical split-air conditioning system, the four basic components are separated into two sections indoor and outdoor.

I will start the basic refrigeration cycle diagram discussion on evaporator section first. As we remember, evaporator and condenser act as a heat exchanges in the air conditioning system.

As the evaporator refrigerant has boiled completely to vapor it’s now saturated vapor at point 7. Some compressors cannot pump liquid; if it does pump liquid, it will damage it. This is why we need the entire liquid refrigerant to boil at point 7.

After, the entire liquid refrigerant turns to vapor and passes point 7. Superheat occurs. Superheat is between point 7 and 1.

Superheat is life insurance for the compressor. It makes sure the compressor does not pull in liquid refrigerant from the evaporator.

The air conditioner compressors located between points 1 and 2 has two important lines: a suction line (low side pressure and back pressure) and discharge pressure (high side pressure, head pressure). 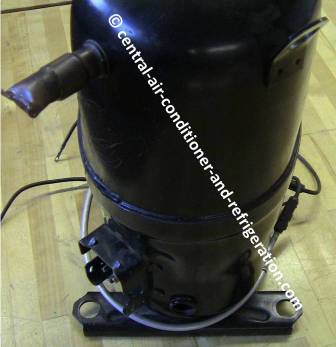 Its creates a pressure difference in the air conditioning system by pulling in low-pressure, low temperature vapor from the evaporator suction line and increasing it to high-pressure, high temperature superheat.

The air conditioner condenser locate between points 2 and 5 is a heat exchange; it rejects both sensible (measurable) and latent (hidden) heat absorbed by the indoor evaporator plus heat of compression from the compressor. 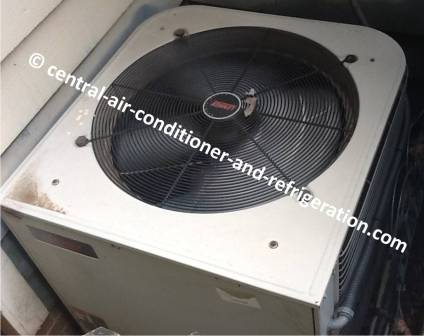 There are three important states that take place in the condenser heat rejection. The first state points 2 and 3 it de-superheat or simply rejects hot superheat vapor (it removes sensible heat).

At points 3 and 4 this the state where it rejects so many saturated vapors heat, it starts changing phase from vapor to liquid; as the refrigerant reaches point 4 it is 100 percent saturated liquid refrigerant.

From points 4 and 5 it removes sensible heat from the saturated liquid refrigerant. This is where we could use a thermometer and tell how much heat it has removed; as more heat is removed it’s now in the subcooled region.

The expansion device (metering Device) is normally installed in the liquid line between condenser and evaporator (points 5 and 7). We cannot see it, since the device is within a compartment.

In a regular split central air conditioners system it’s located indoors with or near the evaporator coils. 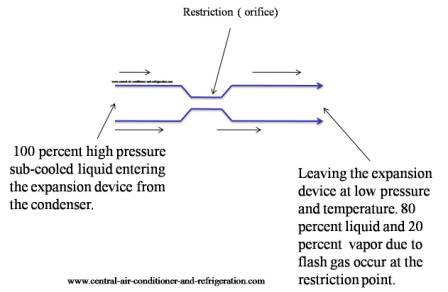 What causes the temperature reducing is due to the restriction (orifice). The metering device is responsible for providing the correct amount of refrigeration to the evaporator.

The operation to a metering is more complicated; however, the restriction is the principle behind every metering device.

Check out refrigeration cycle for beginners. I explained from a split central air conditioning units standpoint.