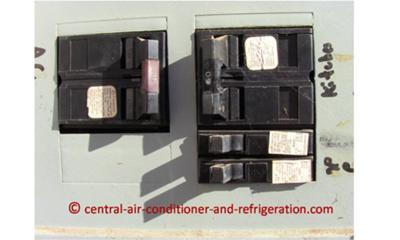 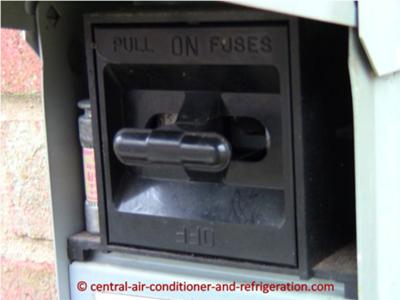 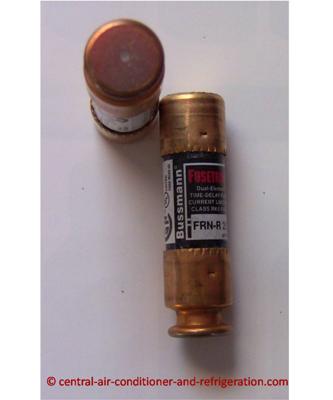 What is central air conditioner fuse?

An air conditioner fuse prevents any parts of HVAC to overload or overheat.

Is a safety (device) that tells the HVAC unit, ok - you supposed to draw 30 Amp. If any part of you draw more than 30 Amp, I’m gonna turn you off.


The fuse box should be in the line of vision; it should be within REACH from the condenser unit location. The fuse for HVAC unit is Heavy duty time delay cartridge fuses. The fuse is within the fuses holder.

The within REACH disconnect is in metal box. It is either a handle that you pull out, within this handler, there is two fuse in the fuse holder. Or there is breaker.

Can I put two different Amp fuse in the fuse holder?

Is it ok to have 2 different size fuses in the outside disconnect box? I have a 20 amp and a 30amp fuse. Could this cause the compressor to blow? The max amp is 30/30 on the AC cover

No. If the original fuse were 30 amps. You should replace it with another 30 amps fuse. The fuse should be time delay fuse. It should say that in the fuse.

“Both fuses should be 30 amps. The fuses should be dual element, slow blow type. You likely will not hurt the system, but the 20 amp fuse will most likely open at the most inopportune time.” By Chester

Sounds like you have a short between the outdoor unit and the control board on the air handler. Your technician needs to check the "Y" circuit for a short. By Chester

If you put fuses in and it blows, don’t put anymore fuses. Have it checks by a tech – yeah, it cost money. Btw, central ac unit is on its own circuit